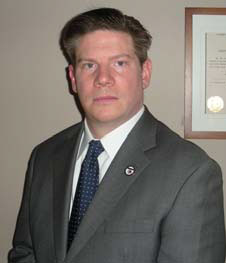 University of Pittsburgh School of Law
Juris Doctor, May 1994

Admitted to Practice in Pennsylvania in November of 1994 (Top Five-Percent Bar Exam Score). Admitted in Middle District, Eastern District, and the Third Circuit Court of Appeals in Pennsylvania’s Federal Courts.

Many of Attorney Wilson’s cases received significant media attention, but Attorney Wilson also handled numerous less serious cases in which he was able to obtain significant reduction of charges and sometimes complete dismissal of cases at the preliminary hearing or pretrial stage.

In 1997, Attorney Wilson won his first fully litigated appeal which resulted in the remand of a case and the ultimate dismissal of charges in a case involving a significant mandatory minimum.

In 1998-1999, Attorney Wilson was assigned as lead counsel on two death penalty cases. In both cases, the death penalty was avoided.

In 1999, Attorney Wilson was hired at a Central Pennsylvania litigation firm, which focused on civil litigation. This experience gave Attorney Wilson the opportunity to handle cases in nearly 20 different Pennsylvania counties. It also exposed him to significant medical training, which benefits his practice in both criminal and civil matters. Attorney Wilson learned to provide efficient, cost effective representation on complex legal matters.

That experience with prequalification, bid protests, and suspension and debarment matters puts Attorney Wilson in a truly unique position compared with other attorneys. When your ability to do business is at stake, retaining experienced counsel is paramount.

While counsel for PennDOT, Attorney Wilson litigated numerous other types cases before various administrative, trial court, and appellate level tribunals. Seven of his cases resulted in published opinions. Three of those cases resulted in publication in national construction law journals and have been referenced in numerous law review articles and subsequent cases (including numerous case references beyond Pennsylvania). During his time with PennDOT, Attorney Wilson also litigated more bid protests than any other Commonwealth attorney.

While serving as a Chief Counsel at PEMA, during Tropical Storm Lee, Attorney Wilson provided critical legal guidance in order to obtain for Pennsylvania, the first Presidential Major Disaster Declaration in the United States (out of approximately 15 states and jurisdictions) and was instrumental in Pennsylvania opening the first disaster recovery centers in the United States dedicated to those affected by Tropical Storm Lee.

In January of 2012, Attorney Wilson returned to private practice where he has used his significant criminal defense and PennDOT experience to assist numerous clients. He has obtained positive results on numerous occasions in a variety of criminal cases from minor to major.

Services include assisting numerous contractors in obtaining initial prequalification (or additional prequalification codes), assistance on bid protests, DBE certification, and claim preparation (usually avoiding a claim and resulting in positive results such as time extensions “in the field”). Attorney Wilson has also represented municipalities with construction issues, and has handled numerous cases of interest including representing an engineering firm on a major case involving allegations of bid rigging and fraud.

Since early 2012, Attorney Wilson has also provided counsel to numerous criminal defendants in both jury and judge trials and has handled numerous appeals including receiving relief for clients in multiple appellate cases.

Attorney Wilson has also helped many clients resolve criminal cases through ARD, significant charge reduction, or through outright dismissal. He has assisted many of these clients with the expunging of criminal records so that any arrest or charge no longer has the same impact for employment or other personal matters.

Aside from criminal and construction matters, Attorney Wilson has received positive attention for other cases where he has significantly assisted clients in various types of litigation.

In his personal life, Attorney Wilson is married with a daughter and is a Fourth Degree Knight of Columbus. He is also a Past President of the Penn Gardens Lions Club.

Attorney Wilson has held numerous local political party positions and has worked on multiple successful political campaigns. In those areas, he has received multiple awards for his dedicated involvement.

Our firm prides itself in providing clients individual attention and experienced counsel. Experience matters when choosing an attorney – and timely legal advice is also critical. We believe that whether you’re dealing with a minor criminal matter or something much more serious, you should be able to count on an attorney to provide sound legal guidance at every stage. This is precisely why we make ourselves available to all our clients 24/7 and we do not charge for most phone calls from our clients. We also team with other qualified counsel with appropriate experience when warranted.

We accept multiple forms of payment including credit cards.